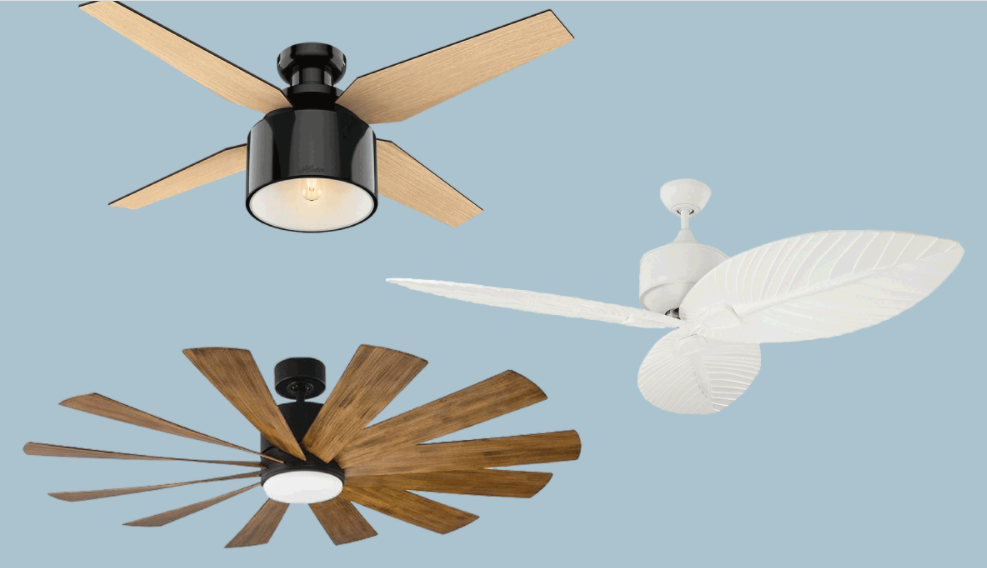 Summer is here and the weather is getting hot. I believe most of my friends are planning to buy fans. There are many types of electric fans, with novel styles, many functions, tall and short ones, and plug-in charging. The price of the same style is also different.

Let’s take a look at the different types of fans.

Ceiling fan is a kind of fan hung on the ceiling. The wind is relatively strong and very cool. Its price is also very cheap. This is the fan that every household bought decades ago.

The table fan includes a base, a fan blade, a fan cover and a rear shell. The upper part of the rear shell is provided with a handle; it is convenient for users to move and carry the table fan.

It can be placed in different positions, such as a bed, a chair, a table, etc. The wind is also very strong, and several people can enjoy this cool breeze at the same time. The table fan is beautiful in appearance, durable, and inexpensive, so it is loved by people and has a wide range of use.

Fan blades generally exceed three blades, with a maximum of five blades. The number of fan blades is directly related to the amount of air generated, wind speed, and rotational speed. Different from ordinary electric fans, this electric fan is equipped with a wind-guiding rotating page, which blows soft and natural wind, and its design can extend the service life of the motor. It has 3-4 wind speeds, two-hour timing, and 360-degree double Wizard wind wheel. This kind of fan does not rotate and is suitable for one person.

Floor fan, we also call it foot fan, floor fan, the name is different in different regions, this is a fan-shaped fan, the wind is strong, it is still cool in summer, and it can also be used to blow clothes, etc. The appearance of this fan is also good-looking. It is tall and big-headed. It is most suitable for family use. It is placed in the living room and rotated left and right. It can be blown by everyone. It is a kind of essential household appliance. One bar. (The current price is also good, it is very cheap, you can buy a good one for 100 yuan, of course, the price of big brands is slightly more expensive.

Industrial fans, this kind of fan is characterized by extremely strong wind and very cool. The natural breeze generated by the industrial fan blows on the human body, which promotes the evaporation of sweat to take away the heat, which cools the human body and brings a cool feeling. Because the industrial fan is large enough, the maximum diameter can reach 7.3 meters, it can generate a large area of ​​natural breeze system, which promotes the overall air circulation, and plays the dual function of ventilation and cooling. The disadvantage is that it is easy to absorb dust in the air under high-speed operation, which is not easy to clean, and seriously affects the service life. When in use, the sound is relatively loud.

Industrial fans are widely used in large logistics warehouses and distribution centers, super large factories, public buildings, large farms, outdoor crowded areas and other places. They have the advantages of balanced temperature, natural ventilation, environmental dehumidification, etc., which can improve air quality, dehumidify and reduce temperature. It can prevent storage from rusting and rot, and at the same time improve the working environment. It can improve ventilation efficiency. Good ventilation can improve air quality and remove odors. It can provide outdoor workers with a cooler working environment, such as outdoor dining venues, which can bring consumers a more comfortable dining experience.

Tower fan, its working principle is that indoor and outdoor air form a three-dimensional exchange system, even if there is no fan page, it can also supply air. The tower fan can swing from side to side, and the swing angle is about 90°, and the 360-degree air supply can cover every corner of the home. The wind generated by the tower fan is very soft, like natural wind, the wind speed will be lower than the commonly used fan. The tower fan can be used as an assistant of the air conditioner. When used with the air conditioner, it can speed up the indoor air circulation. It is suitable for families with the elderly and children. The appearance of the tower fan is neat and beautiful, and it does not take up space, but it is more difficult to remove than ordinary fans, and more difficult to clean than ordinary fans. If you prefer a soft wind, you can choose a tower fan.

A hand-held fan is a fan that can be carried around by hand. The biggest feature is its beautiful design, exquisite and compact, and can be placed anywhere, and can be easily installed in a bag for easy carrying. There are also three speed control functions. A better quality handheld fan can be used for about 45 hours with a single charge. It is very suitable for shopping and travel. It is a must-have product in the very hot summer.

The bladeless fan is also called an air multiplier. It can produce a natural and continuous cool breeze. Because it has no blades, it will not cover dust or hurt the fingers inserted by children. The biggest difference of a leafless fan is that it does not have the “leaf” of a traditional fan. What’s more amazing is its peculiar shape, beautiful and refreshing appearance. Bladeless fans use technology in jet engines and car turbocharging. The engine base is the key to making a fanless fan. The airflow through the engine base can increase the effect of airflow multiplication.