The unique Wii controller was the biggest selling point, its successor may also take long enough effort in the history of electronic games with the upper and lower parts. But having said that, since the development of interactive entertainment, I am afraid there will not be what the shape of the handle and then to frighten the player, and if there is the handle. 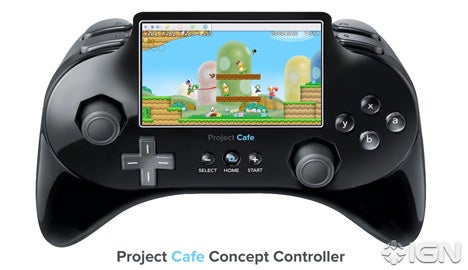 Host-specific to Nintendo’s new controller, but now they have a lot of sounds have news of the nose has eyes out, of course, a wide variety of imaginary map. Currently the most widely circulated a Wii controller on Wii 2 news that the peripheral will be able to show the independent game with LCD screen, with multi-touch and two modes of operation the analog stick, and even built-in camera.

American Science and Technology Information Kotaku quoted sources from the industry source said, Wii 2 controller design to include a 6.2 inch touch screen and 8 physical buttons, it seems closer to the traditional game controller. However, Nintendo did not intend to use it is said to completely replace the current Wii Remote. the two may correspond to different user groups. One thing is certain: Nintendo hope to continue to play arm to play the game, which means Wii 2 somatosensory will require specialized game controllers, just like the Wii remote control also need to handle and the Classic Controller to play different types of games are the same. However, Kotaku’s news sources did not explain what is the new host before the Wii’s remote controller, there will be improved or new product launch support.

Wii 2 will become on your TV screen, the screen though Wii 2 handle a new Wii controller sounds far less magical remote control handle, it may not be the year when it was released Wii sensational effect, but 6.2 inch touch-screen design should still attract a lot of people’s eyes. Nintendo can do a lot with this screen, for example, when the real-time display the map in the game, bar equipment, props or other game information. With built-in camera, you can also play derived more interesting, such as playing a “zero” this game, you can simply lift the handle to the evil spirits to take pictures, not as in the past used on TV virtual viewfinder. It is not clear that the camera on the handle is on the front or back, of course, does not rule out the same as 3DS and one each on both sides.

As for the touch screen, synchronized to more. Support for touch often means very different gaming experience, NDS has been through a lot of successful cases demonstrate this point. 3DS heavy plate of “The Legend of Zelda: Ocarina of Time 3D” is said to be very dependent on touch operation, and now Nintendo seems to allow players to such a touch screen, screen to watch the game on another screen design is very satisfied with the new handle might make the two separate screens, so your TV into the screen, handle the present screen.

Nintendo does have plans for Wii 2, their next generation console that will “leave your mouth open” according to earlier reports. What features do you think would be awesome in a Wii sequel? Looking for more information about Wii accessories, welcome to visit TOMTOP or paste the link into your browser: http://www.tomtop.com/wholesale-video-games-accessories-for-nintendo-wii-c254

How to Choose the Best Barcode Scanner

How To Set Up IP Camera In Your Room