As we know, Tank aquarium is a glassware which always used for keeping tropical fish aquarium or goldfish, plays the role of watch to us. It also known as eco-tank, which is to watch with specialized aquatic feeding container plants and animals, and also is an animal feeding area, usually with at least one of transparent glass and high-strength plastic. We often breeding of aquarium plants and animals,who can live in the water, such as fish, but also invertebrates, amphibians, marine mammal snim or reptiles and so on. Aquarium keeping is also a popular hobby around the world, there are around 60 million enthusiasts.

There are many types of changes in the aquarium, there is simply keeping a fish only a small Fish Tank, and then to the need for complicated support system with eco-precision analog aquarium. The aquarium of the marine living can be very large, for example the Alaska aquarium, aquarium’s capacity is 5,400 cubic meters, about 580 breeding of aquatic species. Some aquarium experts will try to maintain the ecological aquarium, and simulate the natural feeding organisms living environment. Aquarium’s water quality control, including the management of nutrient inflow and outflow, but also should be noted that waste management. The nitrogen cycle in the aquarium is the nitrogen into the box from the food, after eating their biological nitrogen into toxic waste, then from inside the bacteria into less toxic nitrogen compounds. Aquarium to maintain a good environment, but also the appropriate species selection, biological load management and good design. 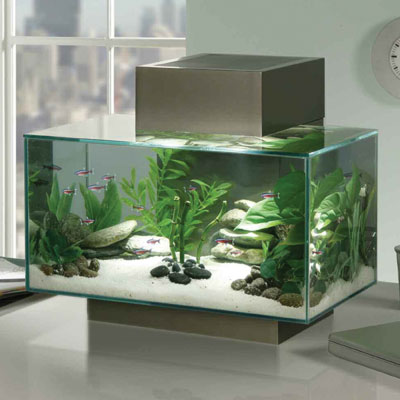 Aquarium landscaping is developed on the basis of keeping tropical fish with the cultivation of plants. In the early stages of raising tropical fish, people only breed some fish in the Tank Aquarium for ornamental, with the watch requirements increase, put some plants in the aquarium as a decoration, also with lighting and temperature devices increasing, maturity of plants from the foil position into the lead position, so that we regard plants grown as a specialized technology to develop. Species of plants increased, and also lay the foundation for the arrangement of plants in the aquarium, people according different varieties, different colors, different shapes of plants, carefully designed layout with stone and driftwood, etc, they always like to create their own piece of the natural world. Even today, specializing in expert-level aquarium landscaping divisions are emerging, aquarium landscaping entertain from the past, cut the throat world of the development of an art project, it is known as “the art behind the glass “, each year, many places in the world will hold the aquarium landscaping game.